* In case of any delay in receiving the OTP, you may verify it later. Please proceed without verification.

Enter your City name or Pincode

Guskara or Gushkara is a municipal town that comes under Ausgram police station of Sadar subdivision in Bardhaman district in West Bengal state. It is located on the northern direction of its district at the distance of 31 km. The northern side of this town is also connected to Bolpur town with 18 km distance while its borders are also connected with the industrial town of Bardhaman, Asansol, Howrah, Durgapur and the state capital - Kolkata. Guskara is also beneficial for the tourists as it is well connected to other Indian states of Bihar and Jharkhand via both road and railways. The natural magnificence of this place is also determined by the flowing River Kunur, a branch of the River Ajoy, which passes through Gushkara. 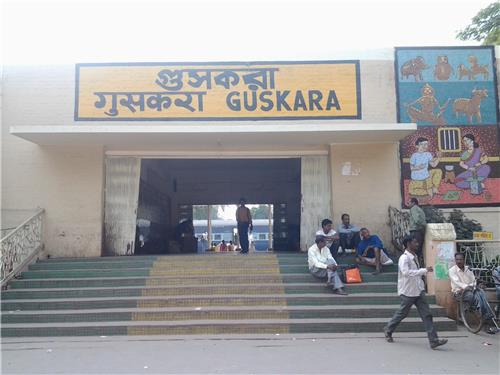 Guskara and its adjoining region was ruled over by Sadgope Kings for several centuries between the area of Damodar and Ajoy that recognized with the name of Gopbhum. Beside the rule of Sadgope Kings, the Sur Kings also ruled this region as their King Adi Sur brought the five Brahmins and Kayasthas from Kannauj (now in Uttar Pradesh). These two castes are now the important upper castes in Bengal. There is no historical evident of the medieval period is available for Guskara. But however, a mass movement was organized in this area in 1943-44 when there was damage occurred into the embankments of Ajoy River, which caused regular flooding problems in Ausgram and Mangalkot areas. Despite having a big meeting to solve that issue, the government did not implement any action. Consequently, a huge work force was provided by the communist Party for the purpose of solving this flooding problem. This place also has a historical significance through an Airfield. Gushkara Airfield is a former wartime United States Army Air Forces airfield in the country, which was utilized during the Burma Campaign in the year 1944-45. This place was a photo-recon base for the Tenth Air Force.

Guskara is located at the latitude of 23.50°N and the longitude of 87.75°E with an average elevation of 38 meters above the sea level. It is surrounded by several rivers such as Kunur River and Ajoy River that impact on its climate conditions. The annual temperature of Guskara is 26.8°C, which sometimes exceed up to 38°C during the summer season particularly from March to May. The summer here is dominated by strong southwesterly monsoon winds with some intervention of tropical cyclones and storms. On the other hand, the winter season starts from the mid-November and continues till the end of February month. The average temperature during the winter season remains between 11°C to 17°C. The area of Gushkara witnesses heavy precipitation between the months of June and September. The months of October and November enjoy autumn season providing the best time to visit this beautiful place in West Bengal.

The municipal town of Guskara has the total population of 35,388 in which there are 18,073 males and 17,315 females, as per the 2011 Census of India. Of the whole population, there are 3544 children (10.01%) below 0-6 age group in the town. Furthermore, Guskara city has a significant numbers of Schedule Caste (SC) people who constitute 33.31% in comparison to the Schedule Tribe (ST) people that constitute 3.90% of the total population. The average literacy rate in Gushkara is 80.16% which is higher than the state average of 76.26%. The city has around 86.38% literate males while 73.69% literate females within its area.

The administration of Guskara, an important town in Bardhaman district, is governed by the Municipality. The Municipality here was established in the year 1985 by the Department of Local Government and Urban Development Authority of West Bengal. Presently, it has total administration over 8119 houses in the city and owns the responsibility of providing basic amenities like water and sewerage and many other services related to the welfare of the society. It also has the responsibility of taking several administrative measures for the capacity building of the urban local bodies and to maintain good urban governance in the city. Organizing environmental, health oriented and slum improvement programmes are also the responsibilities of Guskara Municipality.

The municipal town of Guskara is largely depended upon agro-based economy. The main agricultural production in this area is done on potato, arum and paddy. In fact, the production of Arum here is popular in its taste while most of the farmers are indulge in the production of potato and paddy. Apart from the agriculture, the people of this region are also indulged in fishery work as for the last few years, the popularity of fish cultivation and breeding is increasing gradually in this area of Bardhaman district. Other major sources of the economy of Gushkara are Poultry farms where large numbers of people are working for their livelihood.

Guskara town of Bardhaman district is well connected to other major cities of West Bengal through both rail and road routes. The city has its own bus stand where both government and private buses are frequently running from varied parts of the district to this place. Another mode of transport here is railway, which is perhaps the best way to reach at Gushkara. The town has its own railway station, Guskara Railway Station, through which one can easily arrive at this place. There are total 16 express trains stop at this railway station besides many passenger ones. Some of the important trains running through Guskara Railway Station are Howrah Bolpur KaviGuru Express, Shantiniketan Express, Sealdah Varanasi Upper India Express, Howrah Rampur Hat SF Express and Uttar Banga Express.

As a vital part of its district, Guskara is comprised of excellent utility services provided to its locals. In fact, it has an efficient amount of bank branches where all kinds of banking activities are done for the public. Apart from that, the city has its own post office which is the sub office of the main branch. It has been providing all important kinds of postal services that fulfill the different requirements of the people.

The inhabitants of Guskara municipal town enjoy the benefit of exceptional healthcare services offered to them. The city and its surrounding areas have the presence of government and some private hospitals in which proper treatment is provided to the all medical problems. These healthcare centers have experienced doctors and nurses who are well qualified to solve your any health dilemma. Besides the presence of many hospitals, Guskara also has sufficient amount of pharmaceutical shops where all types of medicines are available.

The area of Guskara is also famous for its Dhokra art castings. There are many professionals including men and women here who have the expertise in Dhokra metal craft. Moreover, nothing different from the vibrant culture of its West Bengal state, Guskara city also brightens up during the celebrations of various local festivals. The local people of this town solemnize every festival with great enthusiasm and belief. The most celebrated event of this place is “Kali Puja”. During this festival, the people used to gather at the temple and offer prayers to Maa Kali. Apart from that, people also celebrate the famous festival of “Diwali”, which is the festival of light. All these festivals are meant for togetherness as well as happiness and thus, people of Gushkara enjoy them wholeheartedly.

Comments / Discussion Board - About Guskara